The Newcastle District Bowling Association has been established for many years and continues to attract new members of all ages.

According to information available, bowls was first played in Newcastle area in 1876 at the Crystal Palace Gardens owned by Mr. J. Anderson, situated in Hanbury Street, Mayfield, near the Waratah Railway Station.

It is also a matter of record that, very shortly thereafter, Bowls was being played in the suburb of Cook’s Hill, on part of the old Newcastle Cricket Ground, but research has failed to produce any evidence of how or why a green came to be established at the ground.

It does seem that one man, local business personality, Frank Gardner, was the person who supplied the initiative and motivation to really promote the game in the District.

The Cricket Ground was located between Parry and Tooke Streets with market gardens on the southern side. Separated from Parry Street by a road on the north, the eastern side bordered on the old Burwood Coal Co. railway line which ran alongside Centennial Park.

Whilst the lack of information of this period relating to Bowls is lamented, it is felt that, knowingly or otherwise, the foundations of the game of Bowls in Newcastle were laid in this area.

Newcastle City Bowling Club, established 30 April 1889, was the first Newcastle District Club and, initially, had a small two-rink green on the Newcastle Cricket Ground, rented from the City Cricket Club, where play was limited to two days a week.

An advertisement in the Newcastle Morning Herald of 26 October 1889 throws light upon bowls of that period stating ‘Newcastle Bowling Club Members can play on the green next to the grandstand on the Cricket Ground on Saturday and Thursday afternoons at 3 o’clock. Members must play in sandshoes’.

When the Newcastle City Club acquired an area on the Upper Reserve (now known as King Edward Park) some members decided to stay on the Lowlands area – the original green – and so emerged the description of bowlers as being either Highlanders or Lowlanders.

Waratah Bowling Club was established 22 May 1890, some fourteen years after bowls was reported as having been played in that area. Initially two rinks were levelled and turfed with the official opening on Thursday 11 December 1890 being celebrated with a friendly game against the Newcastle City Club. Waratah travelled a rocky road for some years: early in its life the club offered its green with improvements, its roller, shed and mower to the tennis club for Fifty pounds to enable the bank loan to be repaid, but the club was reformed in 1897 becoming a force in the future of our game in the District.

Lowlands Bowling Club came into being because of that land acquisition by Newcastle City. Those members who decided to remain at the original site on the green described as being ‘pleasantly situated on the Newcastle Cricket Ground’ completed the separation from their ‘mother club’ by forming Lowlands club on 21 September 1892.

The club was to remain on the Cricket Ground green until 1912 when it moved to its present site, also ‘pleasantly situated’, this time in Centennial Park.

Hamilton Bowling Club, established 5 May 1896, owes its origin to the economic conditions of the time when a few unemployed tradesmen and contractors rolled up in Hamilton Park to escape boredom. This activity continued for four years before the club was born. First intentions were to commence officially in November 1896 but the members decided to construct a proper four-rink green before holding such a function. A meeting was subsequently held on 12 January 1897 at which the Hamilton Bowling Club was officially launched.

Those four clubs conducted various competitions amongst themselves, it soon becoming evident that a controlling body was needed, for reasons similar to those experienced by the clubs in Sydney.

It is not clear how it came to pass, but representatives of the four clubs met in conference over a period of time and a penultimate Draft Constitution was produced which was then sent back to the clubs for their further consideration, thus the wheels were well and truly set in motion for the birth of our Association.

The first General Meeting of members of the four District Clubs was held in the Hamilton Council Chambers on the evening of 22 September 1898 with 50 members in attendance.

Mr. G.P. Lock of the Lowlands Club was voted to Chair the Meeting which affirmed the desirability to form an Association, then dealt with the clauses of the proposed Constitution ad seriatum finally being adopted as the Constitution of the Association named:

Included in the sixteen clauses of the constitution were those controlling Substitutes, Nomination of Players, Declaration for Association match and Members of two or more clubs. It is interesting to note that even at that date, clause 15 stated that no member could play in any Association match during the season for more than one club without a written permit of the Association.

The Committee of Management subsequently elected a Selection Committee consisting of one representative from each club plus the Association President.

One must appreciate the great feeling of excitement that would have prevailed among the people who took those positions: people with a vision of what lay in the future, and acceptance of the tremendous task they had undertaken.

The Northern District Bowling Association was the third such Association to be formed, behind only the New South Wales and Victorian bodies and one day before Western Australia! 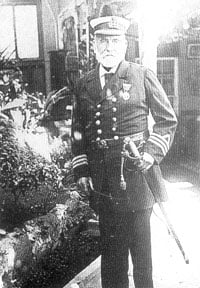 Commander Frank Gardner was a very well known and public-spirited citizen of the day. Born in Tewkesbury England in 1811, he went to sea at the age of fourteen, eventually coming to Australia and finally settling in Newcastle in 1862. Commander Gardner was well known in his general Agency, Insurance and Auctioneering business, also having interests in other commercial pursuits.

Commander Gardner was a great benefactor to a number of worthy causes. He defrayed the cost of the brick wall and front entrances to the Newcastle Cathedral, he gave to the Cathedral the marble altar of the Warriors’ Chapel and he presented to the City the Memorial monument and statue which stands in front of the Newcastle Post Office.

A noted and excellent rifle shot, interested in all sports, he also found time to be secretary of the committee that organised the very popular New Year’s Day regattas on Newcastle Harbour.

It was, however, as a bowler that Commander Gardner was best known in sporting circles. Having learned to play the game on his father’s green in Tewkesbury, he already had some experience before it started being played in our district.

From its inception in Newcastle he had helped to develop and foster the game of bowls. He was the founder of the Newcastle City Bowling Club in 1889, served as its President until 1907 when he stepped down and was appointed Patron of the club, holding that position until his death in 1926. Known as both a good ‘draw shot’ and ‘driving’ player, he was a revered member of that club.

It would seem he was the logical choice to be President of the new Northern District Bowling Association. A liberal patron of the game, helping more than just his own Club and the Association, Commander Gardner remained Association President until 1926, during which time he did much by his enthusiasm and knowledge to help establish and further the popularity of the game in the district and beyond. It was because of all his efforts in promoting every aspect of the fledgling association and the game itself, that Commander Frank Gardner rightfully earned the recognition afforded him as:

‘The Father of Bowls in Newcastle’.